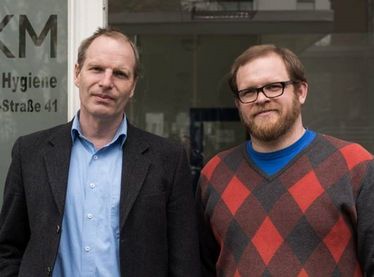 The IZKF principal investigators Prof. Klaus Dreisewerd and Dr. Jens Soltwisch from the Biomedical Mass Spectrometry Group at the Institute for Hygiene have spent many years improving the resolution of the matrix-assisted laser desorption / ionization mass spectrometry (MALDI-MS) that was initially developed in Münster. Together with Bram Heijs (a visiting scientist from the University Medical Center Leiden / NL), the two scientists succeeded in developing the so-called MALDI-2 technique that increases the detection limits of high-resolution imaging mass spectrometry for a large number of important biomolecules by two orders of magnitude and more. The results were published in the journal Analytical Chemistry.
In cooperation with the Biomedical Mass Spectrometry group, one of the leading manufacturers in this field, Bruker Daltoniks incorporated the MALDI-2 technology in a high-performance mass spectrometer. Bruker announced this major advance in matrix-assisted laser desorption ionization at the virtual Annual Meeting of the American Society for Mass Spectrometry.

You can read the complete press release (in German) of the Medical Faculty of Münster here.