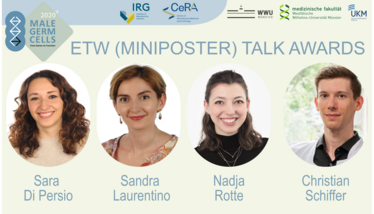 This years ETW2021 was a great success! Not only was there a lot of fascinating science included and presented, but four of our members were in addition awarded with 'Best Talk' or 'Best Miniposter Talk Award':

Moreover, the Münster crew have made second place in the virtual video contest, showing a bunch of fun and digital creativity. Congratulations and all the very best for your ongoing projects!