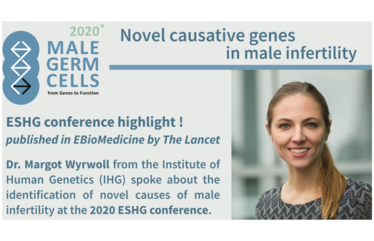 Margot Wyrwoll's ESHG 2020 talk was featured in an article at EBioMedicine - by The Lancet.

'Margot Wyrwoll from the Institute of Human Genetics (University of Münster, Germany) spoke about the identification of novel causes of male infertility. Around 7% of all men are infertile and, of these, 11% have azoospermia, meaning that their semen does not contain any sperm at all. Although some male infertility associated genes are known (e.g. TEX11, NR5A1 and DMRT1) and form part of currently trialed diagnostic panels, ∼75% of patients remain without a causal diagnosis.

Margot's work focused on the men with non-obstructive azoospermia, confirmed through testicular biopsies that showed no cells beyond the spermatocyte stage in the testis. This indicated that the lack of sperm was due to meiotic arrest. During meiosis, the proteins MSH4 and MSH5 form a heterodimer that facilitates the resolution of double Holliday junctions during crossover of the homologous chromosomes. In model organisms, biallelic loss-of-function of MSH4/MSH5 has been linked to infertility. In women, mutations have been associated with infertility and premature ovarian insufficiency (POI). However, no pathogenic variants in MSH4/MSH5 have so far been described in men.

In their cohort of men with complete bilateral meiotic arrest, the researchers had 54 unresolved cases with a confirmed testicular biopsy. A further 517 men had unexplained non-obstructive azoospermia but no available biopsy. Screening of whole exome sequencing (WES) data identified variants in MSH4 in two men and in MSH5 in three men. Of these, four variants were nonsense and one was a homozygous missense of uncertain significance according to clinical guidelines but considered by the researchers to be likely causative. This work demonstrates for the first-time pathogenic variants in MSH4/MSH5 in male infertility and reveals an overlap between male infertility caused by meiotic arrest and POI.'