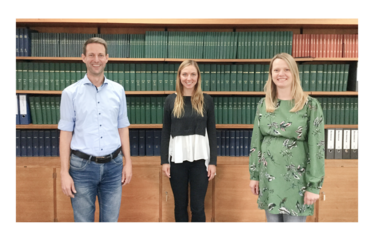 A prime example of international and cross-institutional cooperation - with 34 authors from 7 different countries, we have succeeded in identifying and characterising a new gene associated with male infertility: M1AP. Encoding for the meiosis 1-arresting protein, this gene presumably has relevant functions during germ cell differentiation. Although there are almost no studies on the detailed gene mechanisms and molecular roles, our work supports the assumption of an indispensable importance during meiosis of male germ cells.

Under the leadership of Frank Tüttelmann, Corinna Friedrich and Margot Wyrwoll (Reproductive Genetics, Münster), this discovery was now published in the high-ranking American Journal of Human Genetics (publication), thus making an important advance in the elucidation of spermatogenic defects. Based on DNA sequencing data from almost 2000 male probands, we indetified pathogenic variants in M1AP in four men from Münster, five members of a family from Turkey, two cases from Portugal and one man each from Giessen, Nijmegen and Newcastle. All patients exhibited non-obstructive azoospermia, i.e. the absence of sperm in the ejaculate due to a spermatogenic disorder, or at least cryptozoospermia, i.e. the detection of less than 1 million sperm per ml of ejaculate. Phenotypic characterisation of the testis supports this description by detecting different stages of germ cell arrest. Similar results were shown in an earlier mouse model - here, successful differentiation of germ cells failed as well and resulted in infertile male mice.

Due to the large number of patients, the existing mouse model and further functional analyses, M1AP can already be classified as clinically highly validated and should therefore be integrated into the growing list of relevant marker genes for male infertility. Thus, M1AP will be included directly in the routine genetic diagnostics at the Insitute of Human Genetics, enabling to achieve improved genetic and reproductive counselling for both men and women.

Please read more about this exciting story at our faculty's homepage (here), the homepage of the University of Münster (here), and at the Informationsdienst Wissenschaft (here). In addition, the relevance of M1AP and its underlying molecular and cellular role will be explored in one of our new CRU326 2020+ projects - P5: M1AP and meiotic arrest, headed by Dr. Corinna Friedrich.