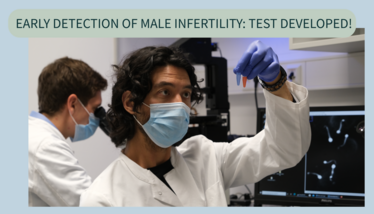 The research group of Prof. Timo Strünker from the Centre for Reproductive Medicine and Andrology (CeRA) at the University of Münster successfully developed a method determining the activity of the protein, CatSper, in the sperm flagellum!. Embedded in our CRU326, his team led by Dr. Christian Schiffer, has developed a novel laboratory test that could soon find its way into clinics. CatSper enables sperm to penetrate the egg's protective coating. It is well-known that lack of CatSper activity leads to infertility – affected men can only conceive a child with the assistance of the ICSI method, i.e. the injection of single sperm directly into the egg. To help affected men/couples, the lack of CatSper activity must first be diagnosed but cannot be detected by semen analysis.

In a pilot study, a prototype of the CatSper-activity test was used to examine the sperm of several hundred men: preliminary results indicated that around 1.5 % of the men with an otherwise normal semen analysis were infertile due to lack of CatSper activity and could only conceive a child via ICSI. 'The CatSper-activity test has already proven its potential. It provides unambiguous and easily interpretable results for the diagnosis of CatSper-related male infertility in just 30 minutes, thereby guiding the couple to an individualised and promising fertility treatment', said Prof. Sabine Kliesch, Head of the Department of Clinical and Operative Andrology at the CeRA.

The potential of the test, which was developed in close collaboration with the Institute of Reproductive Genetics (IRG), the Department of Clinical and Operative Andrology, and the Fertility Center of the University Hospital of Münster, has also convinced the German Federal Ministry of Economic Affairs and Energy: granted almost 650 000 € from the funding program EXIST - Existenzgründungen aus der Wissenschaft. A team from the natural sciences, medicine, and business administration is now the driving force for the development of the test prototype into a market-ready in vitro diagnostic device.

Congratulation to this success! For more information, please visit the news portal of the Medical Faculty.