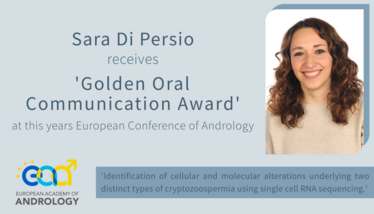 Congratulations to CRU member Sara di Persio for receiving this year’s ECA Golden Oral Communication Award. The award was presented during the 19th European Congress of Andrology (ECA), that took place from 19th-21st October in Barcelona. Sara convinced the jury with her presentation on “Identification of cellular and molecular alterations underlying two distinct types of cryptozoospermia using single cell RNA sequencing”. Her abstract was selected from over 150 accepted abstracts, four of which received the Golden Oral Communication Award. Along with the award, Sara received 500€ prize money and was granted the honour of presenting her talk in the main auditorium during the first plenary session.

The ECA represents the most relevant scientific and educational biennial event of the European Academy of Andrology (EAA). This year’s edition celebrated not only scientific progress in the field of andrology but marked also the 30th anniversary of the EAA. The conference comprised 30 scientific sessions and over 240 presentations, and it attracted more than 600 attendees from 50 countries.