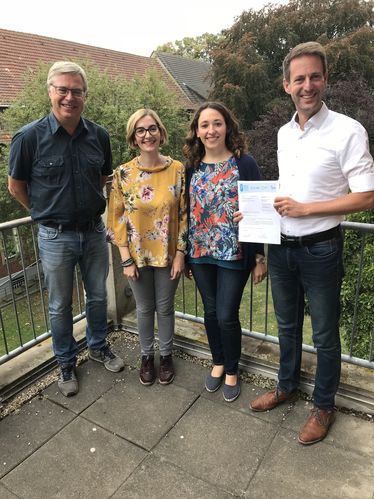 On the 20th of September, a positive funding decision was made for the pilot project of Dr. Sandra Laurentino and Dr. Sara Di Persio by the CRU326 Management Board.

The project, entitled 'Single-cell transcriptome analysis to dissect the interaction between soma and germline in the human testis', aims at studying the transcriptional profiles of testicular cells at single-cell level.

Spermatogenesis is a process that involves not only germ cells but also the somatic cells that nurture, provide paracrine regulation and create an ideal environment for the production of sperm. The interaction between the germ and somatic cell compartments of the testis is thought to be of major importance for successful spermatogenesis. In the human, however, it is difficult to study all of these cell types due to scarcity of available tissues and also by the difficulty in separating the different cell types. As of late, such constraints can be overcome by novel single-cell techniques, such as single-cell transcriptome analysis, which will be used in this project. The project leaders will use the 10X Genomics single cell RNA sequencing to dissect the changes to the transcriptome of somatic and germ cells in the testes of men with full and impaired spermatogenesis. The knowledge obtained will help identify differences between fertile and infertile men.

Sandra Laurentino and Sara Di Persio are both post-doctoral researchers at the Centre of Reproductive Medicine and Andrology.