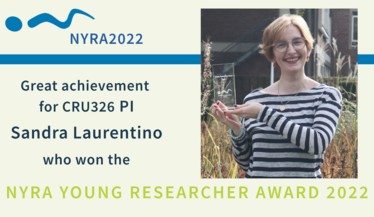 During the latest NYRA (Network of Young Researchers in Andrology) meeting that took place from September 19-21 at the University of East Anglia, CRU326 PI Sandra Laurentino received the Network’s 'Young Research Award' for her scientific impact on the effects of ageing on the male germline. The award recognises emerging group leaders who have mentored fellow young researchers, demonstrated scientific independence, and made an outstanding contribution to the field of andrology. NYRA awarded 5 such awards in the past 15 years, with Sandra Laurentino following in the footsteps of CRU326 research coordinator Frank Tüttelmann as the second winner coming from Münster.

The CRU326 congratulates Sandra on this great success!